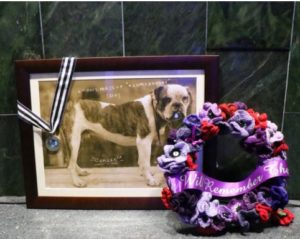 On Wednesday, 27 February 2019 at the National Army Museum, Waiouru New Zealand a Blue Cross Medal was awarded to Ceasar, a bulldog who was the first New Zealand dog to serve this country in war. He embarked with A Company, 4th Battalion of the NZ Rifle Brigade in February 1916. He is New Zealand’s first recipient of the Blue Cross Medal, an award for bravery. His name was misspelt originally, and so it remains: Ceasar, not Caesar.
Ceasar was not simply a mascot: he was trained as a Red Cross assistant. With his handler Rifleman Thomas Tooman, he spent time in Egypt undergoing intensive training, Tooman as an ambulance driver, Ceasar to locate wounded soldiers. Ceasar was one of perhaps 18000 dogs who served the Allies in WWI. They were trained to sniff out wounded men on the battlefield and were equipped with a satchel containing bandages, a notebook and a pencil – soldiers who could attend to their own wounds and write messages for the dogs to take back. Ceasar was also trained to bring back items such as a cap or piece of torn clothing from unconscious men. He was personally responsible for locating many wounded soldiers at the Somme, although
his short legs were a handicap amongst the deep mud. On one occasion he dug an air-hole through earth that had smothered a soldier after a shell explosion.
Ceasar’s career was short – he was killed just a couple of weeks after arriving at the Somme. Tooman found him in No Man’s Land, lying dead beside a dead soldier whose hand was on the dog’s head as if he had been patting him – perhaps it gave them both comfort in their final moments. Some of the dogs were mascots, offering companionship and comfort. Paddy, a small terrier, left with the Wellington Infantry Battalion in October 1914. He was at Gallipoli and the Western Front, but although he survived his hearing and nerves were
seriously affected. He died in England in 1922. 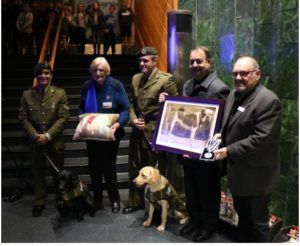 Tooman’s great-niece Patricia Stroud has written a children’s book “Caesar the AnzacDog” about Tooman and Ceasar was present at the ceremony. Ceasar`s collar is held by Auckland War Memorial Museum.
See: https://nzhistory.govt.nz/war/mascots/first-world-war-mascots

The Blue Cross Medal is open to pets that have done something brave, have lifechanging partnerships, are assistance animals or serving or working animals. Ceasar and the other military dogs are very deserving recipients. Nigel Allsopp read out a letter from Steve Goody Chief Operating Officer and Deputy CE Blue Cross and a brief history of the role of the organisation 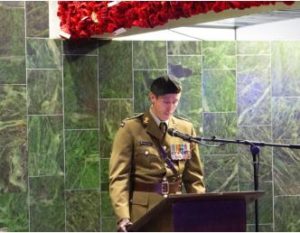 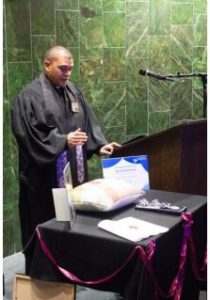 Pictured above: NZDF Chaplain Jonathon Holland blessed the Award medal and Certificate sent from the UK. The ceremony was held in the beautiful memorial room at NAM, with a waterfall over Greenstone background.

Some other dogs that served with New Zealand troops were acquired in Britain or France; most died there, but Floss, a fox terrier who became the mascot of the NZ Army football team and enchanted all with her performing tricks, was smuggled back to New Zealand. After her death aged 17 her body was stuffed and kept in a glass case but is now lost. Freda, a Harlequin Great Dane stationed with the Rifle Brigade, died at Cannock Chase where locals look after her headstone at the war cemetery there.
Major-Major, No. 1 Dog with 19 Battalion, was a white bull terrier who was wounded at El-Alamein but died of sickness in Italy. His grave was marked with a memorial sign. 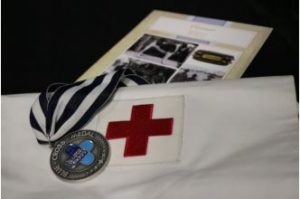 Pictured above: The Blue Cross Award was sent from Blue Cross Headquarters in the United Kingdom, it will be displayed at the New Zealand National Army Museum alongside war animal memorabilia attached around a full-scale model of Ceasar. 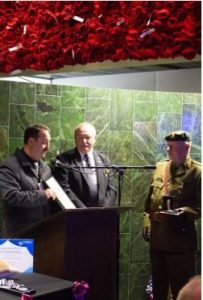 Pictured above: From left Nigel Allsopp (AWAMO and Blue Cross Organisation) and President Frank Neulist (Ararat RSL Australia) recognise the work of Captain Bruce Page in support of war animals in NZ and presented him with a certificate and medal of appreciation. Captain Page is New Zealand’s AWAMO Ambassador.