Ex-Police Dog Has a New Career 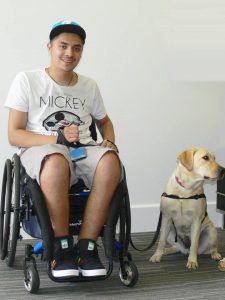 In mid December 2013, Senior Constable Nigel Allsopp a Dog handler at EORT, conducted a lecture on service animals to the Gold Coast Rotarians as part of community service/education.

Nigel was approached by the committee afterwards and told the story of Shem a young 21 year old male quadriplegic who had been in a terrible traffic accident resulting in his condition.

Shem has little movement from mid chest down and finds it difficult for his hands to grasp firmly. Rotary has been trying to get him a service dog to enrich his life. Sadly there is over a two year waiting list for suitable dogs.

Nigel approached his immediate supervisor Mark Hester and a short time latter permission was obtained from both NCO and OIC Police dog section to have Ally.

Ally is a 2 year old golden lab and had recently failed her Police drug dog course. With some initially training from AO Kerryn Ballantyne a Police Kennel hand, Ally was well on the way to a new career.

Nigel arranged a meeting with all parties in January 2014 where Shem and Ally met for the first time. Thanks to Rotary who raised the money for Ally’s training cost, she was handed over to Canine Helpers trainers for her 3 month course.

Ally the ex- police dog is now well on the way to being qualified service dog for the disabled and teamed with her new dad Shem.

Ally helps out by picking objects Shem drops or cannot reach like the TV remote, the mobile phone and tows Shem around the shopping mall at great speed. But best of all this ex-cop who is still serving the community in her own way has enriched the life of a fellow Queenslander.

Of course like all dogs Ally needs regular vet attention as well as parasite and health preventative medication. Nigel approached Josh Llinas who is the Queensland Police dog section vet at Green-cross Jindalee who kindly arranged for Green-cross to take care of Ally’s needs at no cost.