“The greatness of a nation and its moral progress can be judged by the way its animals are treated”. Mahatma Gandhi

The aim of memorials around the world is to recognise the sacrifices
of humans during conflict and adversity. We rightly honour the men
and women who have died in conflict by displaying their names
on war memorials.
The Australian War Animal Memorial Organisation (AWAMO) was
set up to promote the establishment of memorials and plaques
honouring the animals that served alongside NZDF and Australian
soldiers during service abroad.
Animals from all sides worked alongside the troops as beasts of
burden, as messengers, ambulance carriers and as comrades.
Animals were used by all sides, often pressed ganged into service;
they had no malice and worked tirelessly alongside their master no
matter what nation they served.
These animals demonstrated true valour and an enduring
partnership with humans, the bond was unbreakable, their sacrifice
was great – we should honour these animals.
Australian War Animal Memorial Organisation (AWAMO)
Nigel Allsopp is the President of the Australian War Animal Memorial
Organization (AWAMO), a registered not-for profit Incorporation
made up of community members from diverse backgrounds that
have the like minded aim to recognise the deeds and sacrifices of all
animal species, who have given their lives and their loyalty, serving
alongside their human comrades on the battlefield.
War Animals are defined by the AWAMO as any animal used in
aid or comfort of defence personnel. Military service is defined by
the AWAMO as peace or war operations or employment. This will
include all past and present conflicts and operational roles such as:
• Military Working Dogs ADF Mascots Equines
• Pigeons Camels
• Marine Mammals
• Other native and exotic animals

As a result of the efforts of the AWAMO a war memorial recognising
New Zealand war animals is being unveiled at the National Army
Museum at the end of February.
New Zealand War Animals
The New Zealand Expeditionary Force (NZEF) Commander, Major
General Godley appointed Colonel Andrew Russell, a Hawkes Bay
farmer with formal British military training to command the New
Zealanders. He had started his leadership at Gallipoli commanding
the NZ Mounted Rifles (NZMR) and must be rated as one of New
Zealand’s finest soldiers. Several references and documentaries refer
to him as saving his troops from unnecessary wastage.
When the main body of the NZEF sailed from New Zealand in
October 1914, a quarter of its men (1,940) and more than half
of its horses (2,032) belonged to the NZMR Brigade. The brigade
was arranged in three regiments (the Auckland, Wellington and
Canterbury mounted rifles regiments, each of 549 men and 608
horses) with medical, engineering and support units. Each regiment
contained three squadrons of 158 men and a machine gun section.
Between 1914 and 1916 the New Zealand government acquired
more than 10,000 horses to equip the New Zealand Expeditionary
Force. In April 1916, more than 3000 animals were sent from Egypt
to France with the New Zealand Division. Several thousand of the
New Zealand forces’ horses remained in the Middle East.
During WWII the NZ war horse was to play a major part in WW2
mainly as supply transport and as pack animals, and on the home
front. In New Zealand the NZMR continued to operate troops of
horsemen for training and also to mobilise a Home Guard to patrol
the long New Zealand coast.
The first four camel companies of the Imperial Camel Corps were
formed in early 1916 to help suppress the Ottoman-backed Senussi
raids on British and Egyptian outposts near the Libyan-Egyptian
border. Later on that year the Imperial Camel Corps was expanded 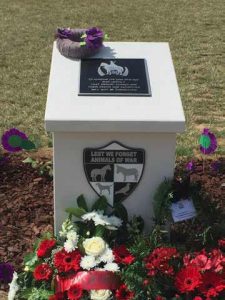 In Australia mention Gallipoli and people think of Simpson (John
Simpson Kirkpatrick) and his donkey. In fact well before Simpson
took up his great work members from the British Medical Corps were
doing the same. When the Kiwi Henderson embarked for the Middle
East with the main body of the NZEF in October 1914 on landing at
Gallipoli he saw Simpson using a donkey to carry wounded soldiers.
He began to do the same. While it is reported that he began this
work after Simpson’s death on 19 May 1915, he was photographed
with a donkey carrying a wounded man on 12 May 1915 by Sergeant
James Gardiner Jackson. According to Henderson’s own account,
he continued the work for about six weeks after Simpson’s death.
Henderson later served in France, and on 22 October 1916 was
awarded the recently created Military Medal for bravery in battle on
land. The citation stated that during operations on the Somme on
15th September he went out repeatedly under heavy shellfire and
brought in wounded who were exposed to it. He set a fine example
to other bearers. Henderson was promoted to Lance Corporal and
then, on 23 March 1917, to Corporal. On the Western Front the NZDF
used local purchased donkeys and mules to haul supplies and they
used many thousands of them. Some Mules did come from Egypt to France

but as replacements were needed NZ forces were issued
with equines from the British and Commonwealth remount units.
None of these were ever brought back home.
Towards the end of WWI, New Zealanders were called upon to top
up supplies of homing pigeons for the Western Front. “The New
Zealand Government would be glad to receive offers of birds from
fanciers in New Zealand ,“ stated the Fielding Star in mid-1918. It was
desirable that the birds should be as young as possible as younger
birds were easier to retrain.
Several hundred birds were sent from New Zealand, but it is unclear
if any saw active service.
War Dogs – the first government military working dogs were not
formed until the mid-1960s, when the RNZAF took security guards
dogs into service to protect the P3 Orion Aircraft. The RNZAF still
maintain Military Working Dogs (MWD), although dog handlers
have been through several name changes the RNZAF MWDs role
remains much the same as it did when formed in the 1960s. That is
to guard and secure Airfields and there assets.
In 2012 after an absence of over 15 years the NZ Defence Force
capability saw explosive detection dog teams broaden existing force
protection measures, providing support to overseas operations,
exercises and tasking’s in New Zealand once again. This time the
Army operates EDDs. The NZ Defence Force identified an operational
requirement for the development of explosive detection military
dogs to support our personnel on operations and exercises. In
Afghanistan, the dog teams will carry out search and detect tasks
and support patrols, assist with vehicle and compound searches
and monitor camp access points.
The NZDF still maintain military working dogs and some Special
Forces personnel utilise equines to carry equipment in difficult
terrain in operational areas. 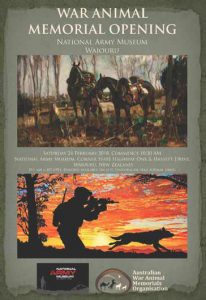