Dear friends of AWAMO, One of the many activities we do is to support other animal charity when and if we can. One of these is using dogs to protect wildlife. There are several projects out there and the first one AWAMO has helped is the protection of Cheetah project.

Because a majority of cheetahs Africa live outside protected areas on farmland, it is essential for the survival of the species to find non-lethal methods of protecting livestock from predators in order to reduce conflict between farmers and cheetah.

The Anatolian Shepherd Dog (Turkish: Anadolu çoban köpeği) is a breed of dog which originated in Anatolia (central Turkey). It is rugged, large and very strong, with superior sight and hearing that allow it to protect livestock. Anatolian Shepherd dogs are used by Dr. Laurie Marker and the Cheetah Conservation Fund in their ongoing efforts to prevent cheetahs which have attacked livestock being killed by farmers.

CCF’s Livestock Guarding Dogs are at the core of its efforts to address the human-wildlife conflict that threatens the cheetah. The Anatolian shepherd and Kangal dogs, raised and bred at CCF Namibia headquarters, are placed with Namibian farmers. The dogs protect livestock from cheetah attacks, barking loudly whenever they see a cheetah or predator, scaring the big cats away. Farmers no longer need to kill cheetahs to protect their livestock and their livelihood.

How successful has the program been? Very. Most farmers report an 80% to 100% reduction in livestock kills by cheetahs and other predators.

Since 1994, CCF has placed over 450 livestock guarding dogs, with more and more puppies born every year. The puppies’ bond with their herds and protect the herds from predators. Most farmers with dogs from CCF report dramatic reductions of livestock losses due to cheetahs and other predators. In turn, this helps the farmers implement improved livestock management techniques and encourages the farmers to co-exist with cheetahs instead of removing cheetahs from farmland.

As some of you may be aware I have worked with these great cats before at Auckland and Dubbo Zoos, they are a graceful animal that deserves saving. 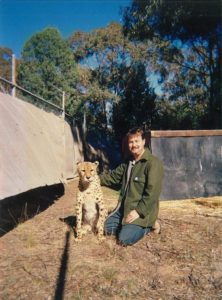 Farmers are so eager to adopt puppies and use this livestock management technique, there is a long waiting list for dogs. Please become a conservation partner and assist in covering half or all of the annual costs in caring for and raising these working dogs. Each dog costs CCF over $500 a year in care. These costs include food, vaccinations, new-owner support, veterinary care and long-term monitoring. Your donation will also support training programs for the farmers. Donations at any level also contribute to the continued observation and care of Guarding Dogs after they have been placed on livestock farms.

Most importantly, your donation helps change the face of Africa not just for wildlife, but for its people. Saving the cheetah can save people, by supporting the human communities that live alongside the cheetah. 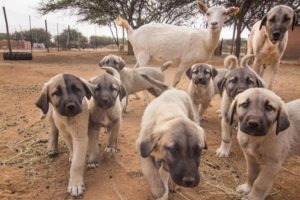 Thanks to all the AWAMO friends who contributed, if you want us to sponsor another= let us know. There are also others using dogs to track down poachers or guard other species of wildlife such as Rhino, as funds and time permits, we will look at supporting as many as we can. 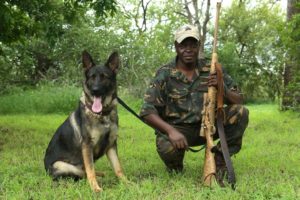 Ever since the first canid tentatively accepted food from a human, dogs have been an integral part of our lives. Our best friend, protecting and serving, often just loving. By our hand, many dogs have had the wild bred out of them. But the most progressive step in our manipulation of the dog is to rekindle their friendship with the wild. In essence, dogs like Vixen now play a role in protecting endangered species, even lions. 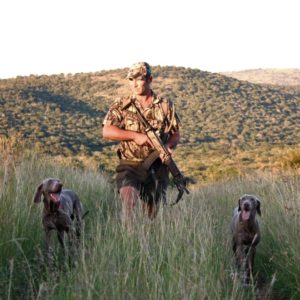 K9 Conservation has been operating since 2011 and has more than ten such dogs working on game reserves near Kruger National Park, a region that has seen some of the worst rhino poaching in Africa. As well as German shepherds, they work with and train Weimaraner’s and Belgian Malinois. Weimaraner’s are a 300-year-old German dog that was bred for tracking and hunting stag and other large game. Their refined hunting instincts enable them to play an essential role in locating animals injured or killed by poachers. This complements the Malinois’ more aggressive nature, endurance, agility and superior skill in tracking humans, so the two breeds are often used in tandem. When a poached animal is located by the Weimaraner the Malinois takes over, picking up the scent of the poachers so tracking, and apprehension of the culprits can begin. 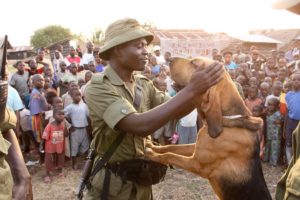 The Virunga National Park in the Democratic Republic of Congo is a world heritage site. It’s also a hot zone for poaching and war, and 150 rangers have been killed there in the past 17 years. The Congo Hounds Canine Unit, which has been operating since 2011, consists of three bloodhounds and two English springer spaniels. In such a densely forested region with difficult terrain, the bloodhounds are extremely useful because they can follow trails that are days old. They can locate injured rangers or track down poacher’s intent on killing endangered mountain gorillas and elephants. But that’s where their work stops as they are too gentle to get involved in actual apprehension. The spaniels are specially trained to sniff out ivory, bush meat and other such contraband, so they are used to search vehicles and villages in the region.