On Tuesday the 26th February we acknowledged the service of 7 x RAAF MWD’s at RAAF Pearce. This came about from the “Thank you for your service packs” that were meant to go out at Christmas. Due to operational requirements and then the Defence stand down period mid Dec to mid Jan it didn’t happen, however we managed to get it off the ground mid Feb which worked perfectly as it came in line with the 24 Feb – National War Animal Day. The SGT suggested that as we were coming up to Pearce to drop off the packs and the biscuits that all retired MWD’s would come up for the day so that we could present them with their packs.

We acknowledged the service of Fang, Rico, Digger, Dagger, Frenzy, Victory and Onyx. Victory has seen operational service in Timor Leste and was wearing her Canine Operational Medal. Dagger snuggled straight into the side of my leg and Digger loved a pat and got plenty. Fang (there is always one) had to be separated from the others in the exercise yard and only came out for the photo. That was also a nightmare as to who to put next to who and their ability to get on – just like kids. In the end Fang had to be put next to Victory (the bitch) as he is just pure alpha male!!! I also got to meet the handler of Onyx who was responsible for the establishment of the memorial to MWD’s in Dubai.

We had a great day – writing a speech and directing it towards a dog isn’t that easy, especially as I myself am not a handler. I usually read a poem by Ian Coate but find that it is more orientated towards SOMWD’s and CAD’s so I chose a poem by RAAF SGT Grant Teeboon – Why (Why I became a Police Dog Handler). It is RAAF orientated and even thought it was written in 1987 I feel is still relevant today. It was a good choice as the OIC of 3SECFORSQN worked with Grant.

The packs – contained a year’s supply of worming from Advocate and 2 x 20 kgs of Black Hawk Biscuits which were our major sponsors, and approximately 6 x rope toys and assorted treats. The rope toys and treats were supplied by pet stores and local supermarkets – I wrote to all the supermarkets in my local area (Coles – Woolies etc) and they were great as they would give me in most cases a $20 voucher to spend in store – this was spent on dentastix and treats – sourcing items when they were on special to get the most value out of the voucher.

All retiring MWD’s were presented with an AWAMO Purple Poppy Pet Tag with their name engraved on it.

They put on morning tea for us. Rico was busy eating sausage rolls – they probably had onion in them but his handler said he was 14 so if he wanted to eat a sausage roll so be it!

The Defence Media Liaison Officer was there with an official photographer – so hopefully it will appear in the RAAF news.

3SECFOR have requested that we make this an annual event (close to National War Animal Day), there is one MWD retiring next time. 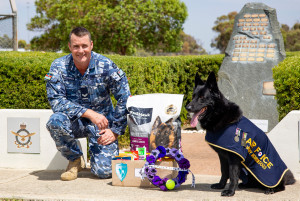 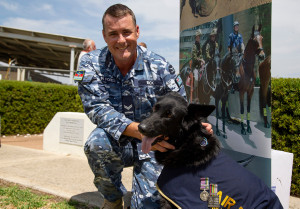