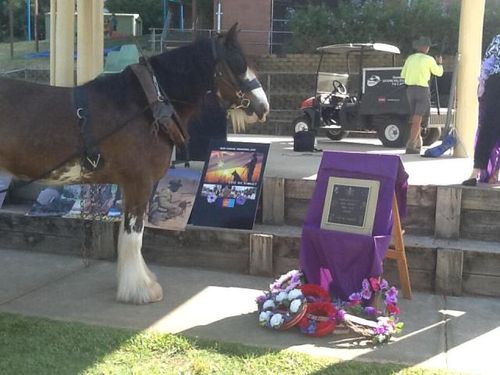 Plaque commemorates all animals who were lost in war. The school is the first school in Australia to have a War Memorial Plaque dedicated solely to animals lost in war. Students from the school asked their principal how they could honour war heroes as a large percentage of students are dependents of soldiers from the near by Enoggera military camp. Brigadier Greg Bilton  CSC, ADC 7th Brigade-Enoggera,  unveiled the plaque situated in the school grounds.
The President of Australia War Animal Memorials ,Nigel Allsopp, arranged the plaque and animals for the day whilst the school staff arranged the event.  Animals attending included a heavy horse, 3x Light horsemen, 2 x Donkeys, 3x RAAF military working dogs and 3x Explosive detection dogs from the army engineers- 2 CER.

Animals have played a very significant role in assisting our defence forces over the years and the memorial plaque is to show support for the many dogs, horses, mules, donkeys, camels and pigeons who have bravely served Australia. The recognition of animals in war is not new as three pigeons had been awarded the Dickens medal – the equivalent of a Victoria Cross – in World War I and a British mine detection dog in Afghanistan has also received the same award.